Trustpilot
The browser you are using is not supported. Some critical security features are not available for your browser version.
We want you to have the best possible experience with Brapper Shop. For this you'll need to use a supported browser and upgrade to the latest version. 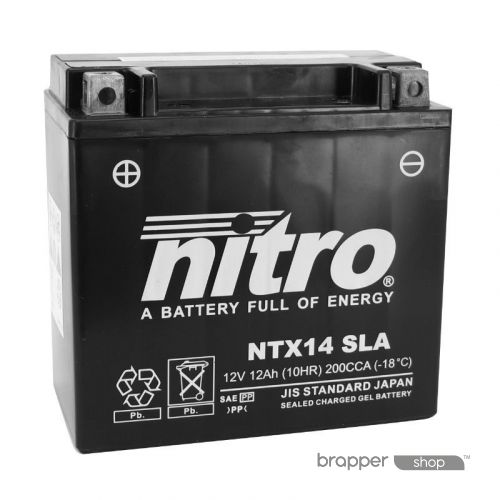 This Item is Currently Out Of Stock

NITRO Batteries are the best possible choice as a replacement battery. From old fashion vent type Standard Batteries to the latest Sealed AGM Gel technology types, every battery is available in the NITRO range. From 50cc scooters to 1800cc Heavy V-Twins, NITRO is the most economical and powerful solution for years of carefree driving pleasure.

Up to now, we are offering delivery to UAE only.

Our policy lasts 30 days. If 30 days have gone by since your purchase, unfortunately, we can’t offer you a refund or exchange.

To be eligible for a return, your item must be unused and in the same condition that you received it. It must also be in the original packaging.

Several types of goods are exempt from being returned. We also do not accept products that are intimate or sanitary goods, hazardous materials, or flammable liquids or gases.

* Some health and personal care items

To complete your return, we require a receipt or proof of purchase (invoice).

Please do not send your purchase back to the manufacturer.

There are certain situations where only partial refunds are granted: (if applicable)

* Any item not in its original condition, is damaged or missing parts for reasons not due to our error.

Once your return is received and inspected, we will send you an email to notify you that we have received your returned item. We will also notify you of the approval or rejection of your refund.

If you are approved, then your refund will be processed, and a credit will automatically be applied to your credit card or original method of payment, within a certain amount of days.

Late or missing refunds (if applicable)

If you haven’t received a refund yet, first check your bank account again.

Then contact your credit card company, it may take some time before your refund is officially posted.

Next, contact your bank. There is often some processing time before a refund is posted.

If you’ve done all of this and you still have not received your refund yet, please contact us at mivomoto@gmail.com.

Only regular priced items may be refunded, unfortunately, sale items cannot be refunded.

We only replace items if they are defective or damaged. If you need to exchange it for the same item, send us an email at mivomoto@gmail.com and send your item to Unit #5, Grand Stand, Dubai Autodrome, Dubai, DU, 000000, United Arab Emirates.

In case of failure of motorcycle tire, it may be the subject for factory inspection. The shipping back to the factory may take extra time to get a decision for a refund.

If the item was marked as a gift when purchased and shipped directly to you, you’ll receive a gift credit for the value of your return. Once the returned item is received, a gift certificate will be mailed to you.

If the item wasn’t marked as a gift when purchased, or the gift giver had the order shipped to themselves to give to you later, we will send a refund to the gift giver and he will find out about your return.

To return your product, you should mail your product to: Unit #5, Grand Stand, Dubai Autodrome, Dubai, DU, 000000, United Arab Emirates.

You will be responsible for paying for your own shipping costs for returning your item. Shipping costs are non-refundable. If you receive a refund, the cost of return shipping will be deducted from your refund.

Depending on where you live, the time it may take for your exchanged product to reach you may vary.

If you are shipping an item over $75, you should consider using a trackable shipping service or purchasing shipping insurance. We don’t guarantee that we will receive your returned item.